PLEASE NOTE: Due to COVID-19, we are operating with vastly reduced staffing levels and as such, orders are being processed and dispatched in batches 1-2 times per week. This may result in some delays on some orders.

You did not add any gift products to the cart. Check your available gifts! 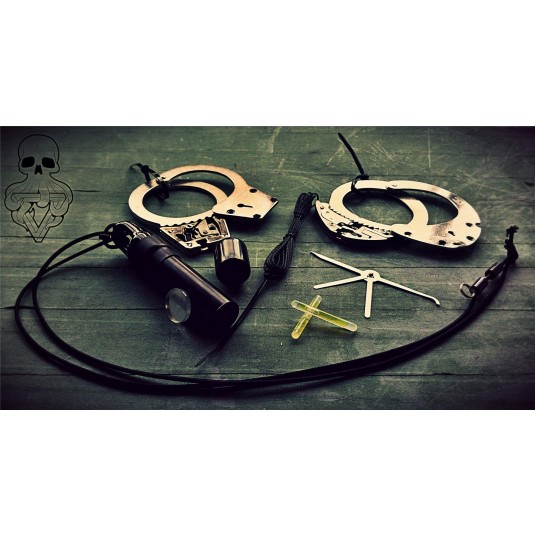 Developed by 4TAC5 the 'Plan B' is a Fast Track Counter Custody Kit that can be donned or removed in seconds so it can be carried & concealed on your person, regardless of what you are wearing. It is also very comfortable to wear so you'll easily forget that you're wearing it (passive).

Full access to the tools is possible if you are restrained to the front or rear and need to put 'Plan B' into action!

We recommend that you carry inside your underwear with the Go-Tube positioned just above your groin and shim installed at the rear on the silicone retainers. If you are restrained to the rear access to the Go-Tube is possible by pulling on the shock-cord to move it from the front to the rear.

The contents of the Go-Tube can be accessed by pulling off the round end cap with your finger nails, or you can leave the cable-tie of the Friction Saw outside of the cap - simply pull on the cable-tie to remove the cap.

Contents The AHK3-XL is the world's most advanced handcuff key designed for law enforcement officers worldwide.

Developed by a former British Police Officer and subject matter expert for governmental, diplomatic, law enforcement, intelligence and special operations personnel that are prone to abduction, kidnap, restraint and detention, during conditions of armed conflict, civil unrest or operations other than war.

The design is based on the latest generation of Advanced Handcuff Key to not only work with common handcuffs but also counter the security features found on high security handcuffs with key blocking blade, large keyway pin, deep set keyhole etc.)

The AHK3-XL has a full depth slit in the key flag to counter the stainless steel security plate on ASP High Security handcuffs. It also operates handcuffs that have a bent pin in the keyway (common with handcuffs that have been used for escape training) that would otherwise block a standard handcuff key.

The AHK3-XL is more than just one handcuff key.

Unlike common universal handcuff keys it will operate the following handcuffs: The AHK3-XL item will fit inside the Go-Tube, DCT and PLAN B.

Applying excessive force will result in damage to the tip of the AHK3-XL. Only a little pressure is required to operate handcuffs with a key - never force a key to turn! Check to see if the double-lock has been apllied by turning the key in the opposite direction. When using the AHK3-XL we recommend that for some handcuffs you use it to 'pick and sweep' the lock, taking care to feel for the movement of the working parts whilst gently rocking, tilting and altering the depth.

It's heavy weight key (27g) so dropping the key onto a hard surface may result in damage to the tip of the key. Always use the shock-cord strap (supplied as standard) to secure the key on your wrist when in use.

The AHK3-XL is also available with an optional Quick Detach Tether (QDT) that features shock-cord and a breakaway safety connector so you can attach to your person and disconnect in an emergency or hand the key to other personnel.

Precision engineered and made in England.

Use spaces to separate tags. Use single quotes (') for phrases.

x
Price:
Actual Price:
Our price is lower than the manufacturer's "minimum advertised price." As a result, we cannot show you the price in catalog or the product page.

You have no obligation to purchase the product once you know the price. You can simply remove the item from your cart.
Our price is lower than the manufacturer's "minimum advertised price." As a result, we cannot show you the price in catalog or the product page.

You have no obligation to purchase the product once you know the price. You can simply remove the item from your cart.